What has changed in the updated Canada’s Food Guide?

With plenty to do in the Okanagan, staying active is an easy problem to solve. However, everybody is always looking to improve their diets. For some, it’s making small adjustments to maintain an already healthy diet. For others, it’s a move toward better nutrition, whether it’s having healthier options or reduced consumption of certain foods and beverages. While these changes are always on people’s wish lists for self-improvement, it can be difficult to actually take action. Part of the reason is that many people don’t know where to start or what exactly constitutes a healthy diet. A good place to start is Canada’s Food Guide. 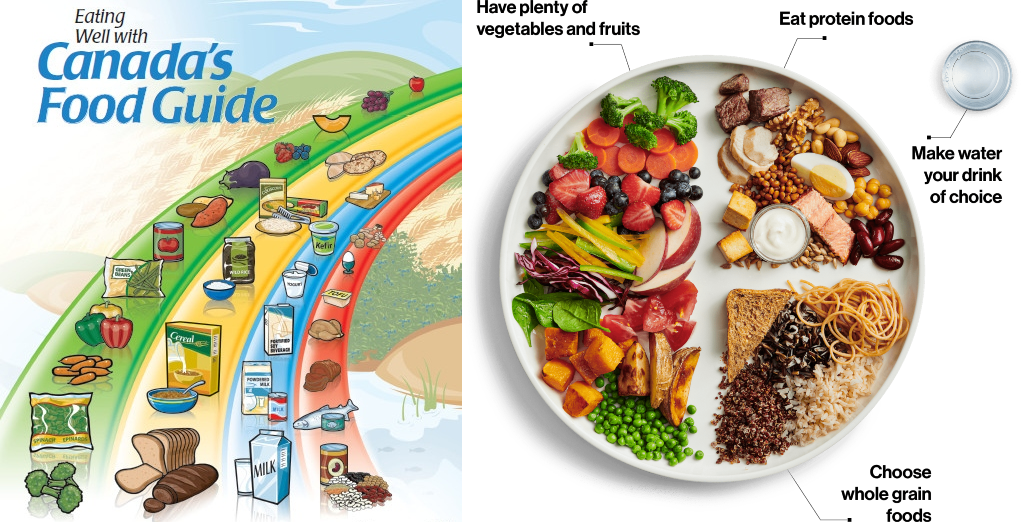 If you’re aware of this guide, you may be wondering what the differences are in the update. If you haven’t been following the guide, you may want to know about the new evidence-based recommendations. We’ll make things easier for you by providing you with an overview of the changes below.

A reduction in main food groups

The number of food groups in Canada’s Food Guide has slowly been reduced since its inception. The most recent reduction was in 1977, where there were four main food groups:

In the latest Canada’s Food Guide, the main food groups has been reduced to three groups:

The vegetables and fruits group is more or less unchanged. Meat and alternatives have now been combined with milk and milk products in a new group called protein foods. The bread and cereals group is now known as whole grain foods, stressing on consuming whole grains over the previous recommendation to make only half of your grain products whole grain. For protein foods, plant-based proteins, such as beans, nuts or soy products, are emphasized since they have more fibre and less saturated fat.

Changes to the proportions of each food group

Though two main food groups have now been combined to form protein foods, the proportions of this new group is not equivalent to the previous two, nor are the proportions of any of the other food categories the same as before. The most noticeable change is the increase in the recommended proportion of vegetables and fruits, which now constitute half of your diet. The consumption of protein foods and whole grain foods have each been reduced to constitute a quarter of your diet now.

In addition to the food groups, Canada’s Food Guide now recommends making water your drink of choice. Previously, no drink was formally recommended. Water is explicitly mentioned now because it is important for your health, it quenches your thirst and it helps you stay hydrated without the calories. Though water is identified as a drink that you should choose, several other choices are listed as being healthy, including unsweetened lower fat milk, unsweetened fortified plant-based beverages such as soy or almond beverages and unsweetened coffee or tea.

A change to more broad guidelines

Some of the guidelines in Canada’s Food Guide are less specific now than they were previously. One of the noticeable changes is that the guide no longer recommends the number of servings people should consume of each food group each day. Instead, the guide suggests for people to mainly use the proportions of each food group as a general measure.

In addition to the types of food that you should consume or avoid, the new food guide also places more attention to food behaviours. Canada’s Food Guide introduces four food behaviours:

By being mindful of your eating habits, you can judge the amount that you should consume by being mindful of when you have had enough. By cooking yourself, you can control and reduce your intake of sodium, sugars and saturated fat. By enjoying your food, you can appreciate the traditions behind the food and culture. By eating with others, you can try new healthy foods and share food traditions. Canada’s Food Guide recognizes that food is more than something you consume. It is also a social activity that ties people together.

As you can see, some of the changes in the latest update to Canada’s Food Guide are quite significant. With less specific guidelines, it puts more weight on your best judgement. Uncertain about how to interpret some of these new guidelines? Get dietician services from the experts at HealthLink BC. Of course, the team at Lakeside Pharmacy in Kelowna will also help wherever we can. If you’re just searching for general advice on nutrition, contact us to learn more.